One of the first things Hans learned when he met me was how much I love dogs.  Really, I love any animal, but dogs top the list.  Early in our relationship, I made it clear that dogs would in some way be a part of my life.  Hans didn't even flinch.

Five and a half years ago, we did not get a dog.  We were both still and school, and a dog was, unfortunately, not an option.  We did, however, find a cat.  I don't mean adopt.  I mean we found a cat.  My roommate's dad raised a sheep, and as is common on farms, there were cats.  One of those cats had kittens.  I'm not sure how or why, but somehow one of the young kittens became separated from its mother.  At only 4 days old, we think it had spent at least 12 hours away from its mother when we found it.  The mother wouldn't take her back, so we decided to raise her.  My roommate, myself, and Hans all too turns feeding her and cleaning her and doing other gross mommy-like things.  Hans was great.

Four and a half years ago we were married, and yes, we got a dog.  Cody was everything anyone could wish for in a puppy, and Hans was great with him.  He got up in the middle of the night to let Cody out.  He didn't yell when Cody had an accident.  He calmed me down when Cody ate my brand-new, never-been-worn pair of shoes (I said Cody was great, not that he was perfect).  He didn't even get mad when Cody had his first counter-surfing episode and ate all the waffles that Hans had just made.  In fact, he just laughed along with me as he realized that things could never be left near the edge of a counter again.  He made a great Cody-daddy.

Three and a half years ago Hans came through again.  He supported me when I decided to become a dog trainer.  He bid me farewell, as I headed off to school, and he patiently waited for my return, all the while living with my dad.

Almost two years ago, we moved into our first house.  We expected things to stay fairly calm and quiet with 2 dogs and 2 cats (we had regained custody of my cat from high school and were sponsoring a Humane Society dog), but Henrico Humane Society and God had other plans.  Instead of calmly enjoying and getting used to our new house, we were raising a litter of 3 week old pups (Lord, help us).  It was long before we were fostering all sorts of dogs, some big some small (most of them big).  We would have anywhere between 2 and 11 dogs in the house at once.  I know Hans didn't and doesn't love it all the time, but he's always been fairly patient.

This weekend, though, kind of topped the charts.  Saturday, Hans woke early with me to care for the dogs.  We fed them and let them out, and then we took two of them for bike rides.  After that, Hans joined me at HHS adoption stand.  There, he walked dogs, talked to people, loaded and unloaded crates, and was an all-around good guy.  Then, he took me to lunch and afterward we ran a quick errand.  It was during this errand that things turned rough.  I got sick...really sick.

We came home, and I went straight to bed with a fever, chills, and a stomach bug.  Hans let out all the dogs, and then cared for me.  That night, he fed everyone, and let me sleep.  Sunday morning, he got up early and let me sleep in while he cared for everyone again.  At some point on Sunday, though, Hans started to feel sick.  He won't admit it, but I think he was fighting off what I had.  Still, though, he refused to let me help.  That night, as I made my way from the couch to our bed, I discovered that I was not the only sick one in the house.  Our cat, Mo, was sick too...all over our bed.  Hans, though not feeling well, stripped the bed and changed the sheets.  He cleaned up where Mo had been ill, and he did it with little complaint.

Last night, I still wasn't feeling great, and I wasn't sleeping well, so when one of the dogs woke up at 3:00 am, Hans got up to let him out.  This morning, I let the dogs out, but Hans was right there with me.  I haven't eaten much since Saturday, but Hans has gotten me anything I've asked for...anything that might make me feel better. 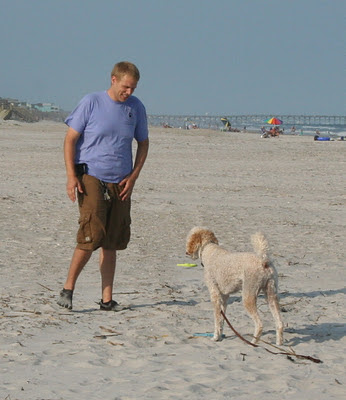