Here we are, in the midst of another show. While the process has been fun, I'm definitely ready for it to be over. Cody is getting hot in his long winter coat, and I'm just down right exhausted. Plus, the time it takes to do the show is valuable time I could be using for business. Lately, I've just been setting up office in the rehearsal hall, using Cody's crate as my desk. It works, but it's a hassle.

As far as business goes, it's going surprisingly well. My schedule is quickly filling up with consultations and lessons. It's hard to believe that just 5 weeks ago I was just out of school and hoping to at least have 1 client. That being said, I still have lots of room to grow, and I can't wait for my scheduled to be filled to the brim (possibly a waiting list).

I don't know if I've mentioned what I eventually want to do with this, but I do have goals. My big goal is to open a doggie day care / boarding / training facility. That's a ways down the road though. I'll reassess where I am in a year and see how close I am to obtaining that goal. Still, though, while driving to the places is a hassle, I'm still quite happy doing what I'm doing. Each new dog is an excitement. Basically, now that I've found this, I can't imagine ever doing anything else. It's nice to love something that much.

I can only hope that you out in blogland are just as happy doing what you're doing! If not, I wish you luck!
Posted by Valerie at 11:02 AM No comments: 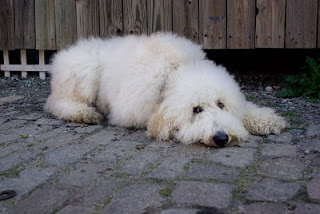 I am currently sitting here next to Cody, waiting for the time for me to take Cody to the stage again. It is opening day. Nothing has gone quite as well as I'd hoped.

There are three things Cody has to do. He has to heel with Annie, he has to stay for a short period, and he has to come to her (and Hans and me) when called. Actually, he stays with Annie really well. Watching him bond with her has been heartwarming. Everything else feels more like heartburn.

I have to admit, this isn't all Cody's fault. A lot of it, actually, is do to the fact that we threw so many new things at him so fast. He was just starting to get how things went when, all of a sudden, we threw in costumes, scenery, lights, and orchestra. Not only does this throw him off, but it also throws the actors off, and this equals difficulty.

As depressing as that sounds, it's really not. I've come to accept at this point that, if he doesn't do things perfectly it's ok. There's not a lot I can do about it other than to keep running it before the show. And really, everyone (actors, crew, and audience) all think he's soooo cute. I'm really proud of him. There are plenty of dogs who would just shake or run away. He just wants to be near Annie, and I can't blame him. She's adorable. If we're lucky, he'll eventually get it. Until then, I can only sit back and laugh (and occassionally shout a "screw you" to anyone who has a problem with him).
Posted by Valerie at 12:11 PM 2 comments:

Well, I have updates on Annie.

Tickets are selling like hot cakes. You can thank the marketing department all you'd like, but I have the feeling that over half were sold due to my parents and the gossip network. There is a plus side to knowing everyone in town.

Speaking of marketing, Cody has some big events coming up. He and Sarah (the girl playing Annie) will be appearing on Channel 6 morning news next Thursday (April 23rd). They should be on around 9:00 am, so make sure you tune in. Don't worry, though. If you miss it, I'll have a recording for sure. He may also have a feature in Family Dog Digest and the Herald Progress in the next couple of weeks. Keep your eyes peeled!

That being said, we just did the first run-through last night. I have to say that Cody did wonderfully! He stayed when he was supposed to stay, he downed when he was supposed to down. He even spoke on cue. I can only hope that he keeps it up for every performance. We have another rehearsal tonight, so that will give me a better idea as to whether last night was just a fluke or not. I really hope not. I hope he's actually starting to get the process in his head. I just have to make sure that he gets enough food before the show so he's not hungry, he uses the bathroom so we don't have an accident, and he's tired enough to stay focus, but not so tired that he's cranky. Geez! What a workout!

Other than that, life is just focused on the business. It's actually going really well. I already have a few clients and hope to be getting a few more here soon. Craigslist seems to be my best advertisement so far, but the show should bring in a few more people (I hope). If you have a dog that needs training, however, you know who to call!
Posted by Valerie at 10:42 AM No comments:

For the Love of Craigslist!

I am in week 2 of my new business. It's odd going from a busy school life, with 5-7 dogs to train each day, to a slow business life. I'm doing everything I can to market and get my name out there, but rewards are slow. I have to keep reminding myself that I've only been going for 2 weeks (not even) and I should be proud of the clients and consultations I do have. That being said, I can't wait for my day to be filled with lessons and consultations.

This is where I say thank you to Craigslist.com. So far, it seems to be bringing in the most people. I have 3 consultations set up next week all from Craigslist. This thrills me. Consultations are free and are no guarantee that I'll actually have a client, but hopefully at least two will sign up. Heck, I'd be happy with one sign up. Of course, if all 3 signed up I'd be ecstatic. Until then, I can only work on getting some more brochures out there!
Posted by Valerie at 11:30 AM No comments:

Last night was my first experience with Theatre IV's Fairy Tale Ball (FTB). Wow! What fun! I don't think I've really explained what the FTB is, so let me do that.

FTB is Theatre IV's big fundraising event. It typically focuses around the spring musical. Last year's musical was Peter Pan, so everything was London and Neverland. This year is Annie, so everything was focused on NYC. This event is a fun time for kids and adults. For the kids there's a make your own cookie stand, a game room, a dance floor, a magician, and lots of candy. To make it feel more adult, it's all formal (or you can dress up like a fairy tale character). Also for the adults there's a silent auction, a live auction, a live band, gourmet food, and free drinks. Everything meshes extremely well.

I put my 6-week course up for auction. Unfortunately only 1 person bid, but quite a few business cards were taken. Plus, I made a few contacts with people who will let me put brochures and cards in their shops. Yay! As for the auction, I won an office chair. It's one that I never would have been able to justifying paying retail for, but the price I got it at was much lower. Yay! That's one less thing to worry about.

Most of my evening was spent with Cody (playing Sandy) and Sara Day (Annie). It was a great bonding time for them, and I hope it helps Cody on stage. That being said, after 5 hours there, Cody became a tired, cranky puppy. He started growling at anyone who surprised him and whined when I tried to give him commands. When he came home, he went straight to sleep, and he's still sleeping at my side right now. Poor guy. He did so well last night. And, truth be told, when he started to get cranky, I was happy. It was a long night for me as well, and I was tired. Plus, he gave the guy on the street a great reason not to pet him. Grrr! Overall, he did wonderfully. Everyone commented on how well behaved he was, and he did quite well in his role as mascot. I'll have to post a picture, but he was super cute in a Theatre IV t-shirt and a bow-tie. My dog went formal! Overall, it was a great evening. I definitely plan to go back next year.

Now for an Annie update. Cody is not doing nearly as well as I had hoped. I'm pretty sure I know why too. The first rehearsal went really well, right up until the end. The end of that first rehearsal involved a scene where everyone runs away from a cop. I think all the commotion terrified Cody (he was shaking at the end). Now, whenever he has to go on stage with a lot of people he just looks absolutely miserable. I talked to the stage manager, Christina, last night and asked if we could just get him on stage with tons of people and let him play with Christina. She could also give him commands and treats. That would help him to focus on her, and would get him over his stage-fright. I can only hope it helps. This will take a bit of work, and there's not nearly as much time as I'd like, but this IS doable. And I plan on doing it!
Posted by Valerie at 7:33 AM 2 comments: